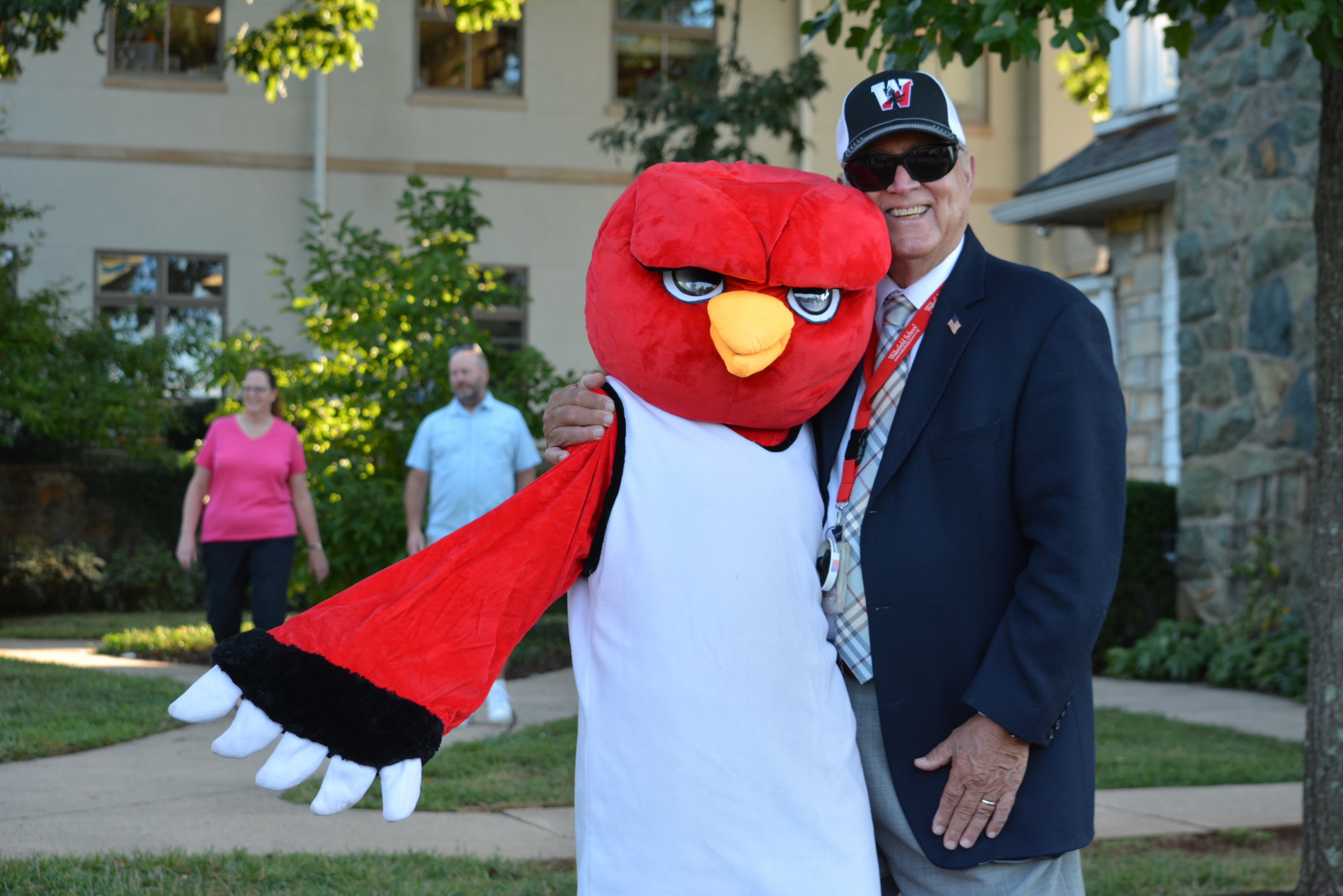 Wakefield’s Middle and Upper School building now bears the name of one of the school’s most devoted, beloved, and respected community members.

In an announcement timed to coincide with both the opening of school and the launching of Wakefield School’s year-long celebration of its 50th anniversary, Head of School Ashley Harper unveiled on the first day of school a portrait of Lieutenant General John Fairfield, USAF Ret., commemorating the naming of the campus’s Middle and Upper School building in his honor.

The announcement came at the new school year’s first All-School  Assembly and was part of a festive surprise celebration for the General, who had been invited as the assembly’s keynote speaker but who had no idea he and his wife Donna were also the event’s honorees. The festivities featured the posting of the colors by a JROTC Color Guard commanded by Wakefield senior Kate Laing, remarks from Mrs. Harper and others, and the presence of many invited guests, including alumni, alumni parents, former faculty, and Trustees past and present, there to honor General and Mrs. Fairfield’s 20-plus years of devoted service to Wakefield School.

Among the alumni guests were several in uniform, former students inspired by Fairfield’s example to choose military careers—though he has equally ardent admirers among students, faculty, and alumni who have chosen aviation, engineering, art, biology, theater, photography, or education as their passion. When Mrs. Harper asked for each student, faculty and staff member, and parent who had “had the privilege of being read to, championed, mentored, or encouraged by General or Mrs. Fairfield” to please stand, the entire gymnasium full of people rose to their feet.

In her remarks introducing the General for his keynote address, senior and Wakefield lifer Kate Neff referenced the prominent place occupied in the Wakefield Courtesies by the classical Cardinal Virtues of prudence, justice, temperance, and fortitude. “These values…have built me into the person that I am today, thanks in large part to Wakefield. They have built within me, and my fellow Wakefield students, a love of giving back to the community both in and out of the classroom…In my mind, there is no one who better embodies these values than our ever-present General Fairfield, showing up, Challenge Coin in hand, to support each of us through our big tests, tournament soccer games, and intense Field Day tug-of-war matchups.”

Fairfield served a storied 34-year-long career in the US Air Force, during which he logged over 4,000 flight hours and 180 combat missions during the Vietnam War, as well as holding command positions in the Strategic Air Command and at the Pentagon, at times commanding more than 85,000 personnel worldwide.

In addition to his 18 years as a Trustee and Trustee Emeritus of Wakefield’s Board, and his role with Mrs. Fairfield as grandparents of a Wakefield alumna and “lifer,” General Fairfield has, according to Mrs. Harper, “chaperoned over 15 Senior beach weeks, joined countless Senior kayak trips, co-taught Dr. Daryanani’s leadership class, read weekly to the Junior Kindergarten classes, including virtually during the pandemic, and served literally thousands of hours helping on campus…The servant leadership demonstrated by John and Donna Fairfield goes farther than one can begin to describe.”

Alongside the General’s portrait in the building that will now be known as the Lieutenant General John Fairfield Building, a plaque commemorating this dedication will also hang. According to Mrs. Harper’s remarks, the plaque “will include the following quote from Mary Baker Eddy: ‘Love inspires, illumines, designates, and leads the way’—a fitting reminder of the kind of service the Fairfields demonstrate, and the kind of service we are called to each day.”

One might reasonably have concluded that these words were spoken as the finale of the dedication ceremony—but Mrs. Harper had one further surprise to announce. “In addition,” she said, “I am pleased to share that at this very moment, a United States flag is being flown over the United States Air Force Academy in Colorado Springs, Colorado, marking this momentous day and General and Mrs. Fairfield’s service to Wakefield. Upon receipt, this flag will be flown over Wakefield’s campus this year before being passed on the the Fairfields.”

Up until this point, the General, known and loved at Wakefield for his not-infrequent displays of heartfelt emotion, had maintained his composure at the dignified event—but with the announcement of the US flag flown in his honor at the Academy, our friend and mentor was finally brought to tears. It was a beautiful finish to a commemoration no one who experienced it will forget.